This version is a minor maintenance release that includes the ability to set a different expiration time for error messages to give you more time to analyze them and possibly replay them. It also includes an upgrade to the latest stable release of RavenDB.  Check out the project website for more information.

The next release, 0.10.0, will include some major improvements including a new GUI and the ability to view and analyze statistics collected from all messages.  You can check out the plan on our Trello board.

This is a minor release but it contains one significant goodie: The details dialog for errors now has a section that displays a nicely formatted stack dump. Here are the complete release notes:

Check it out the Project Site for more details.

The Rabbit Operations project has reached a pretty significant milestone with the release of version 0.7.0. Most notably, it now supports message retry for NServiceBus. There are plenty of other goodies in this release including a refreshed GUI, retry history on messages and a more reliable queue poller. Check it out. 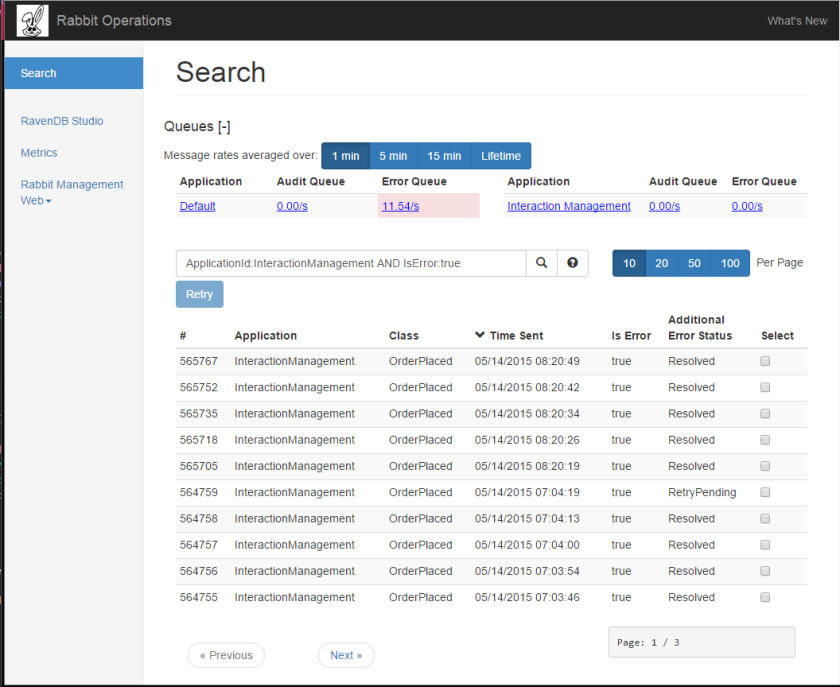 An early preview release of my new open source project, RabbitOperations, is now available at https://github.com/SouthsideSoftware/RabbitOperations. The idea is to provide some tools for managing real-world applications that use RabbitMQ. It will support popular message buses like NServiceBus and Rebus with error replay, audit & error logging, sophisticated search capabilities and likely an integration with NewRelic to log stats about queue lengths etc. This very early release lacks a UI and is only suitable for experimentation and potential contributors.

I just published my first npm package, delcom-indicator.  It’s a basic driver for the Delcom Visual Indicator.  I built it to support the node.js build light project I am currently putting together for the Raspberry Pi.  This library supports any platform that supports node-hid, which should include Windows, Mac and most Linux distributions.  It has been tested on Mac OS/X 10.9.2 and Raspian.

The publication process for node packages is a little easier than the one for .NET Nuget packages.  To get started, you need to setup an account at npm and authorize it on your computer:

Assuming you have a node.js project that includes packages.json in your directory, publishing is as simple as:

So it appears that my mistake was paying a little extra for the kit.  I reformatted the SD card, downloaded the new out of the box software (NOOBS), copied it onto the SD card, powered up the Pi and about 30 minutes later it was booting just fine into Raspbian Linux.  I’ve got to pick up a supported USB WiFi device today so I can get it onto the network.  I can then start testing some code.  Fun!

Recently, we spun up a new team at Blinds.com to work on a critical add-on called Blinds Tracker for both our production web platform and our soon-to-be-released Autobahn platform.  In addition to being the Product Owner I am also handling DevOps tasks.  One of the fun things I did for the Autobahn team was to put up a physical build light from Delcom that glows green when all is well, blinks blue when a build is underway and flashes red when the build is broken.  I built the necessary utility in .NET and so the light has to be plugged into a Windows laptop that sits off in a corner polling TeamCity from time to time.

Once I had the new project building on TeamCity I decided I wanted a build light for it too.  Besides being a stop on the company tour, it provides a nice visual indication of the project’s health for me, the other team members and stakeholders that can see it from across our open floor plan office.  It’s a different team so I didn’t want to share the Autobahn build light; When it turns red, it should be because Autobahn is broken.  The teams don’t sit in the same area so I can’t really plug a second light into the existing laptop either.

Sounds simple right?  All I have to do is purchase a Delcom visual indicator, grab an old Windows laptop, install my utility and hook it up.  Unfortunately, we don’t have any unused laptops around so I’d have to requisition one.  I jokingly discussed it with one of the developers on the team and he said, “well, you’ve been working with Node.js.  Why don’t you just get it up on a Raspberry Pi.”

So in typical geek fashion I set out to save a few hundred bucks by spending some indeterminate hours of my personal time putting together a Node.js build light application for Raspberry Pi.  I’m lazy so I ordered the Raspberry Pi B (512MB Ram, 2 USB Ports, HDMI and Ethernet), a USB Wifi dongle, a micro USB power supply, an 8gb SD card and a clear case from Amazon.  I also ordered a tri-color USB visual indicator from Delcom.  It will all arrive at the house early next week.  In the meanwhile, I’m going to start building a Node.js website to configure settings and a TeamCity poller that will eventually drive the light.  I think I can get it setup to work on any platform that supports HID so it will likely work on various flavors of Linux, Mac and PC in addition to the Raspbian Linux distribution for Raspberry Pi.  It will be an open source project and I’ll put the source up on Github.  Should be fun.

Tom has been a technology innovator for over 35 years and is currently the Technology Director for search at Home Depot.

Join me on LinkedIn